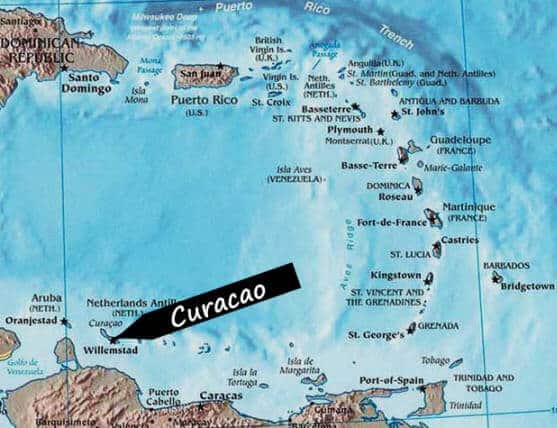 The island Curacao is located in the southern Caribbean Sea, just north of South America, about 45 miles of the coast of Venezuela.

Curacao stretches about 40 miles from southeast to northwest. And about 10 miles from north to south on its widest point. Its 180 square miles 472 km2 makes Curacao the largest island in the Dutch Antillean island group. Based on the latest headcount in 2011 Curacao has around 150.000 habitants, plus another 10.000 more illegals people say.

Is Curaçao in South America?

Curaçao is tectonically located on the Caribbean plate , which is neither part of North America nor South America.

Geographically it is in North America Culturally, it is in South America.

The Caribbean often has its own place in the division of America. They are considered to be part of Latin (or Central) America.
This also applies to Cuba , but also Panama and so on…
So this case….Central America seems the safest to avoid controversy.

Curaçao is the C in ABC Islands

Curacao is one of the ABC-islands, as people refer to Aruba, Bonaire and Curacao commonly.

The northern coastline is characterized by its rough cliff formations and is less populated than Curacao’s southern coast. The north will make you experience nature, smaller villages and many of the islands famous plantation houses. The southern coast will offer you many of the beautiful beaches, hotels, resorts and restaurants the island has to offer.